This was our toughest day by far… and we had a feeling that it was going to be.  We knew that the terrain was going to be challenging.  The Unit 39 description on the Denali National Park website states that the route south of Mt. Sheldon to the Toklat River is “gentle but brushy in sections.”  Let’s put an emphasis on “brushy.”  Our immediate challenge, besides the overcast, rainy skies and cool temperatures, was a mix on dense pine trees, tussock tundra, and knee high scrub.  Within eyeshot we could see the saddle over which we would be passing just south of Mt. Sheldon.  The rule when backpacking without trails and only using topographical maps is to know the direction of your end point and then to identify more immediate visual goals that keep you in line with your end point.  By identifying the next goal before proceeding it allows you to stay on track even when you are diverted because of an obstacle.  This was essential for us on this particular day, but even more so on days 5 and 6 when crossing the Muldrow Glacier.

After breaking out of the brushy stuff our hike was up a couple of hundred gently sloping feet to the Mt. Sheldon saddle.  Don’t worry… as wet, cold, and ticked as I look in the picture below… it wasn’t long after that moment that I said to the guys, “On a scale of 1 to 10 with 10 being the most amazing time of my life… this is an 11!”  Believe me… as difficult as this day was physically… it beats almost anything else you could be doing in your regular, boring life.  Which reminds me, about 90% of backpacking is mental.  Having a negative, pessimistic, and defeated attitude can break even the most physically trained athlete.  That is why I love backpacking so much- It teaches you so much about life and how to endure and press on… even when you are in the most difficult situation. 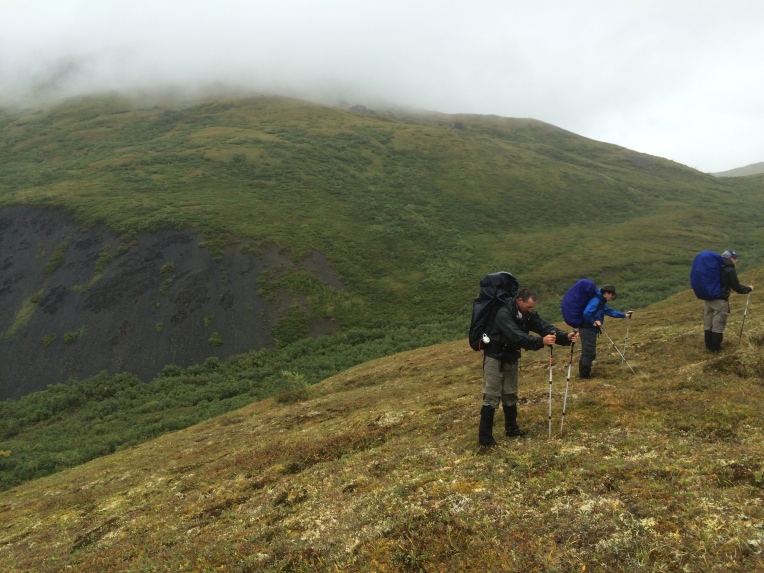 Our view once we made it to the saddle was… well… disappointing.  More brush.  And more dense brush.  And more rain.  And more wind.  Just over the saddle was a perfect spot for a snack.  I believe that it was at this point that Patrick noted how there is absolutely no place to escape the wind and rain.  No tall trees.  No caves or overhangs.  Just you and the wind and the rain.  So you may as well decide to laugh and love it.

At one point we thought that we hit the jackpot by finding a dry creek bed to follow but it was short-lived. We reentered the brush and soon enough approached a marshy area with a couple of small ponds where we took another break. 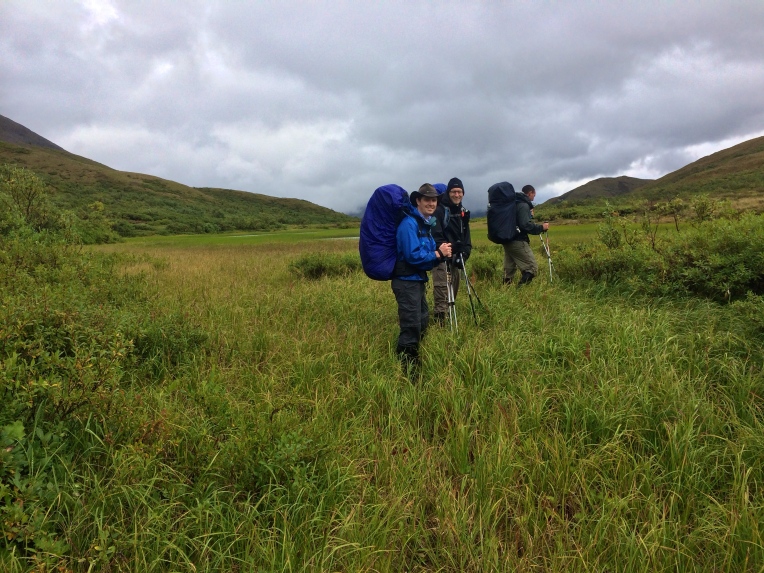 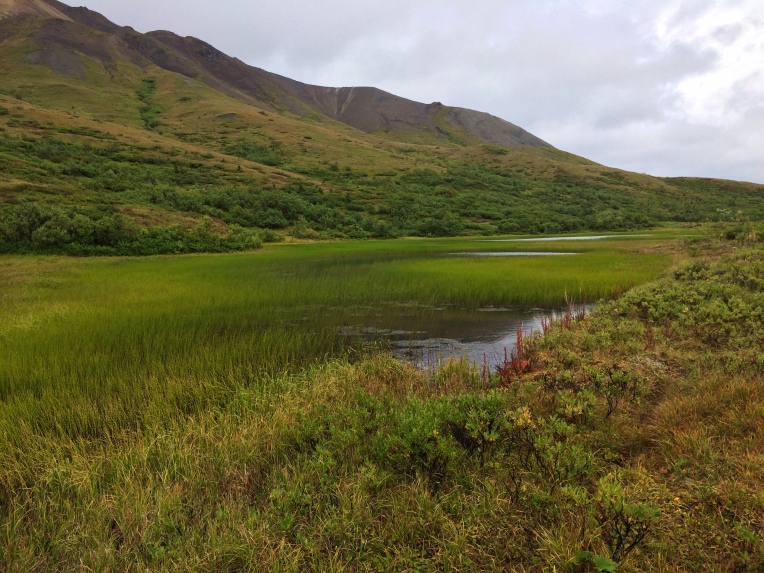 It was at this point that we had to make a decision about our route. We were within eyeshot of Sheldon Creek and wondered if the most efficient route to Toklat would be following the creek. After weighing the options, including the distance to get to the creek and then fighting the dense Alders for a mile, we decided to stay with our current route across the tussock tundra, however we would have to fight the Alders occasionally. For any of you who think I have been exaggerating about the difficult conditions, here is a beautiful video illustration of how it really was.

As we were just above the final tree line before making our final descent down to the Toklat, the clouds began to break up and the sun began to peek through. It made for some sweet shots before tackling the roughest patch of this hike called Bear Draw. The trees and brush were so dense that it was almost too difficult to get through. Occasionally we would find a moose trail and follow it for a while before it trailed off to a dead end… and then it was bushwhacking. It seemed as if we would never make it to the bottom. I was growing increasingly weary, but just as I had a thought of stopping we popped right out onto the gravel bar. I can’t think of many trips in which I felt a greater sense of accomplishment than this particular day. It was long. It was hard. It was wet and cold. I immediately began to strip off all of my clothes, just standing in my underwear trying to dry off. The sun felt great. Well, it felt great for 20 minutes… and then began to rain on us the rest of the evening. 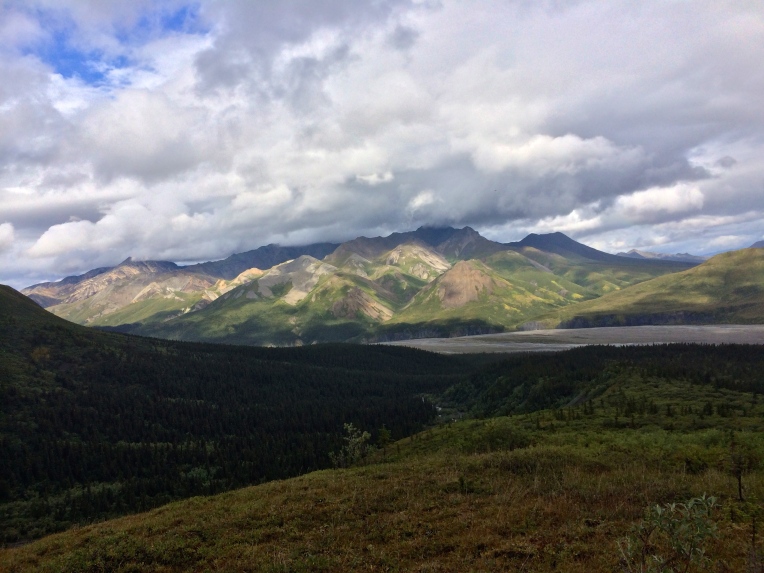 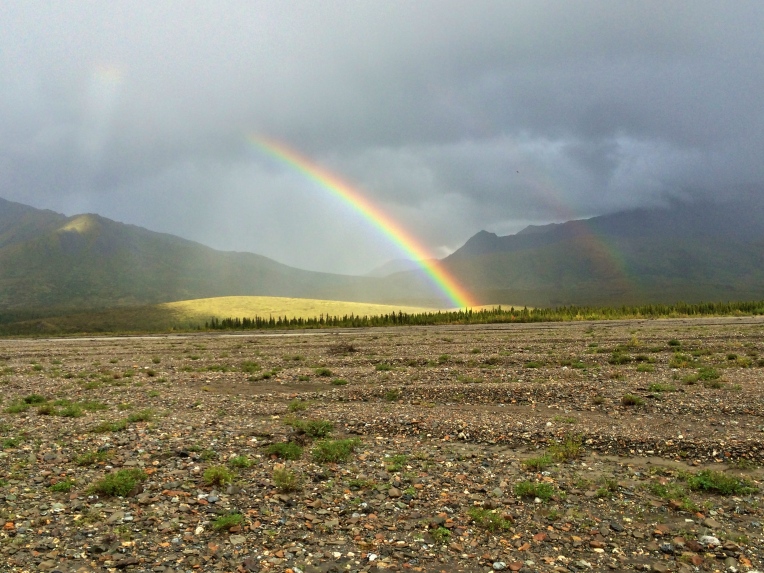 An edited, day-by-day version of my adventure in Denali National Park appeared in the fourth issue of Sidewalk – a hiking and backpacking magazine.

In my next post I will talk about Day 4- hiking down the Toklat to the Toklat Rest Area where we would catch the green bus and then beginning our next hike in Units 18, 19, and 13.