We arrived in Lone Pine, California late Thursday/early Friday and stayed at the Whitney Portal Hostel and Hotel, where we got a few hours sleep before dropping our rental vehicle at a Whitney Portal parking lot (our end destination) and meeting our shuttle that would take us to Bishop Pass Trailhead.

We used East Side Sierra Shuttle (Paul Freitheim), who is incredibly knowledgeable of the area and the trail, and who also has a ton of funny stories to share.  He agreed to take us to the White Mountain Ranger Station in Bishop where we would pick up our backcountry permit.  While two of us took care of the permit, the other guys walked to Eastside Sports to pick up fuel canisters.  Once we secured the permit and fuel we made the short drive to Bishop Pass Trailhead.  We were getting a bit later start than we would have liked.  I think it was after 11am by the time we unloaded our gear and settled up with Paul.  Our estimated mileage for the day from the trailhead to LeConte was 11.5 miles with 2800 total elevation gain.

Our trek from South Lake began in Inyo National Forest/John Muir Wilderness.  Trail conditions were extremely dry.  Two months before this trip we monitored fire activity in the area.  One of the biggest fires in the area, Rough Fire, began on July 31, 2015 and, despite all efforts to contain it, was still continuing to grow when we began on September 4.  This massive fire was approximately 30 miles west of the John Muir Trail and approximately 80,000 acres, which meant that we would deal with a significant amount of smoke over the seven days on the trail, as you will see in many pictures.

The great thing about this trail, and then the John Muir Trail, is that there is no guessing where the trail is.  While our Denali trip in 2014 did not have any trails, but was all about route finding and bushwhacking, these trails were incredibly easy to follow.  The greatest challenges for us, even on day one, were acclimating to the elevation and the daily physical demand of distance and elevation gain. At the end of the day, despite all of our exhaustive planning, we are still from Indiana (650 feet above sea level)!  Actually we did just fine.  We trained a ton and I believe everyone took Diamox for a few days to speed up our acclimation to the thin air.  Other than breathing hard on day one, I don’t believe anyone suffered any ill effects.

Despite the dry conditions, the stunning beauty that we saw was off the chart.  Even when I am surrounded by what looks like a trail among a boulder field I have to pinch myself to make sure it is real.  That is exactly how it was the first 5.5 miles to Bishop Pass, as we crossed into Kings Canyon National Park.  There is certainly a possibility of getting so wrapped up in the mileage and the 2800 foot climb that one doesn’t slow down enough to appreciate where they are or what they are seeing.  People always ask me for advice or perspective on backpacking and the number one thing I always say is, “Don’t forget why you are there in the first place.  Breathe deep and take it all in.”  Pictures are one thing, but remembering how it felt and how it looked with your own eyes is an absolutely priceless experience that a small percentage of the population ever get to realize.  And don’t forget to turn around occasionally to snap a picture of where you came from! 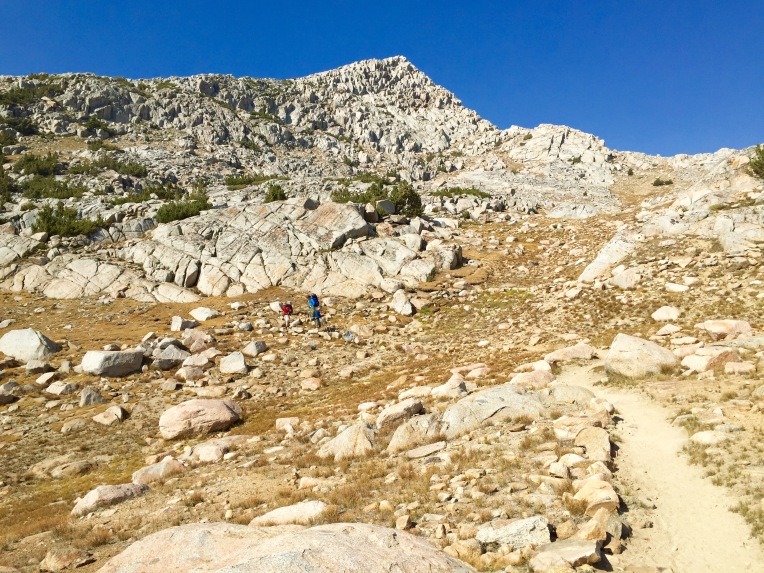 The biggest drop of the day was around Dusy Basin.  Our eastward view displayed magnificent and hazy views of Isosceles Peak and Columbine Peak.  Further in the eastward distance was a beautiful razor’s edge of 14-ers, including Thunderbolt and North Palisade.  As we continued to drop from Dusy Basin into LeConte Canyon, our views boasted of Langille Peak and the Citadel.  Depending on which direction we were looking we could either see the contrast of marvelous blue skies and ridge lines or mountains fading into the smoky haze.  Unfortunately for us, we were heading into the canyon where the smoky haze rested for the evening. 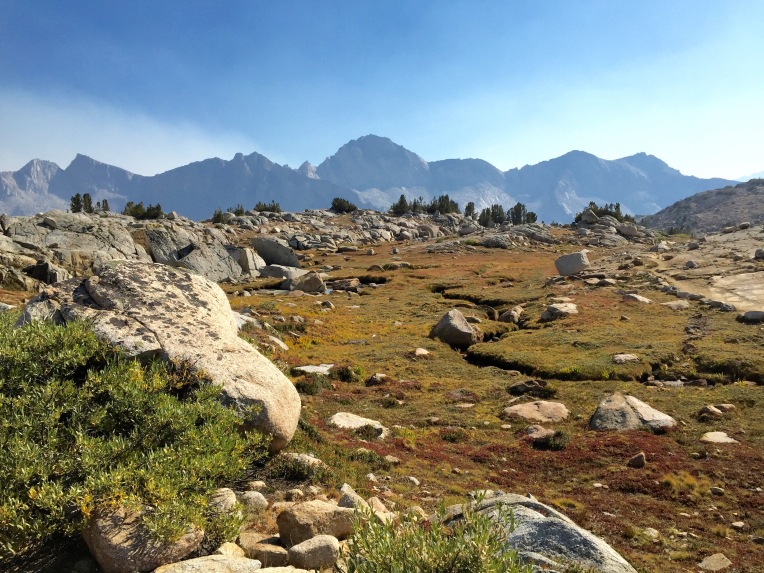 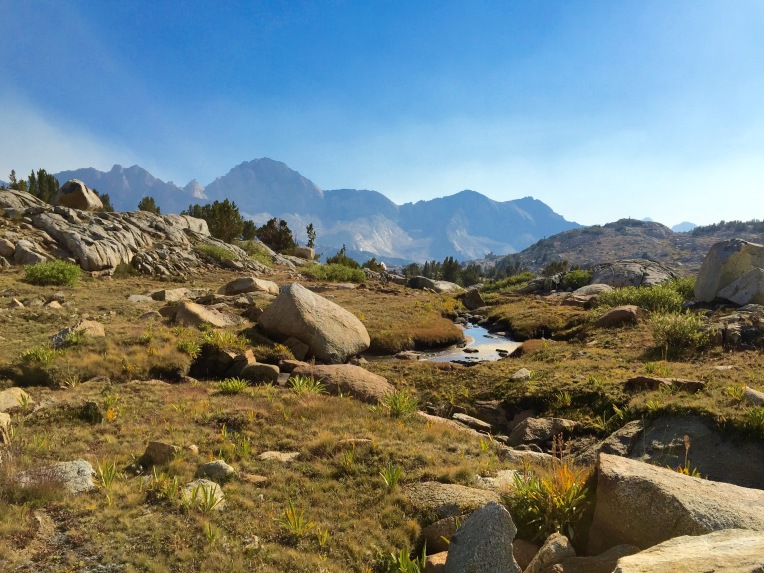 From Bishop Pass to the JMT junction at LeConte is 6.0 miles and a descent of 3874 feet.  To be honest, it was some really easy hiking that passed through some really spectacular areas.  The smoke was a real irritant, however.  We realized after a couple of days that the smoke would clear out overnight and then usually reappear around 2 or 3pm the next day.  Being that we got a really late start this first day, we battled the smoke a bit more than would subsequent days.  While I didn’t take any pictures of our campsites or set-up, there are quite a few places to camp that are spread out from one another.  While there were others camping at the other spots, we really never felt as if they were too close or inhibiting our experience.  The camp spots are relatively easy to spot, as they are areas that have had quite a bit of usage over time.  Some areas along the JMT provide metal bear storage boxes to put your bear can in for the night.  In other areas, where there are no metal bear storage boxes, one would need to simply put their bear cans in an area away from tents and the eating/food preparation area. 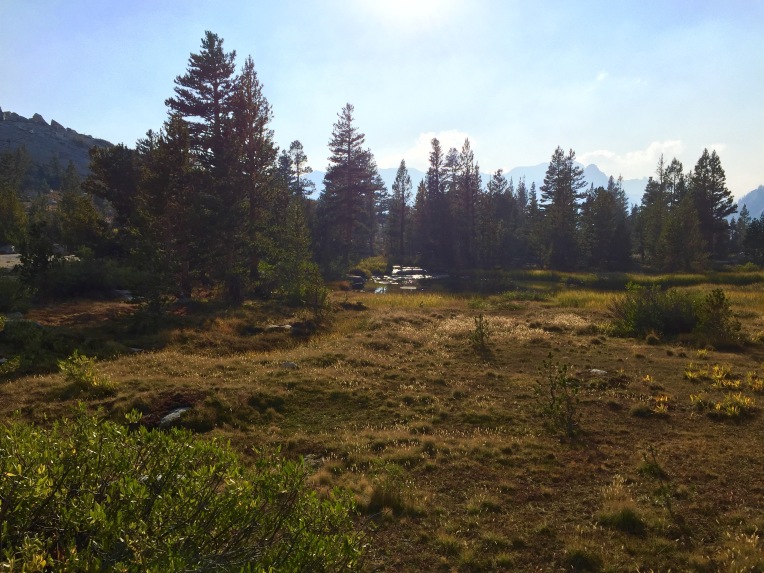 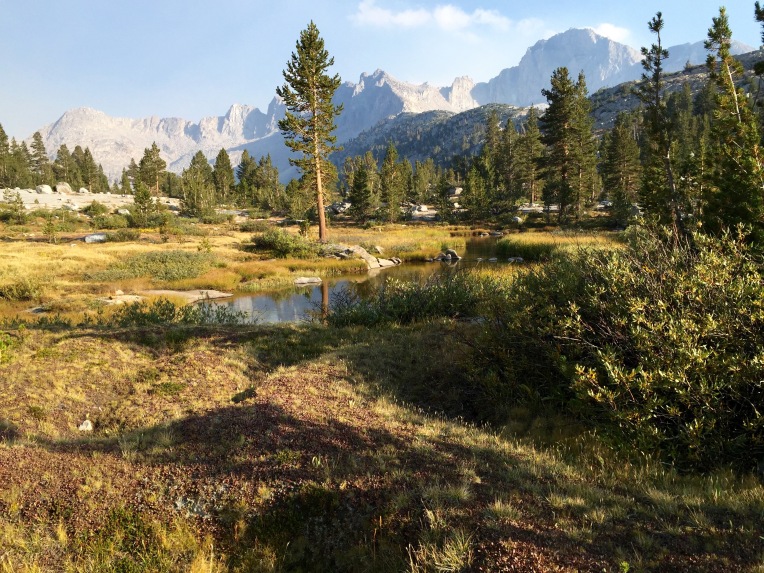 The Day 2 would take us from LeConte along the JMT, through Grouse Meadows, up the mighty Golden Staircase, and then to Palisades Lakes.