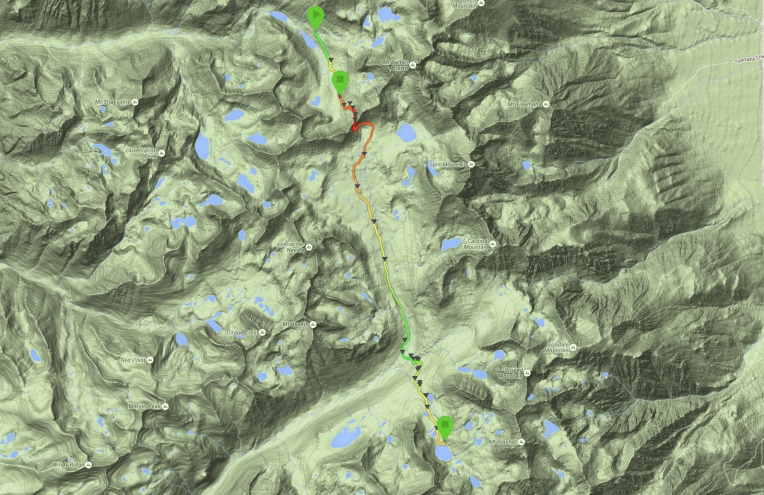 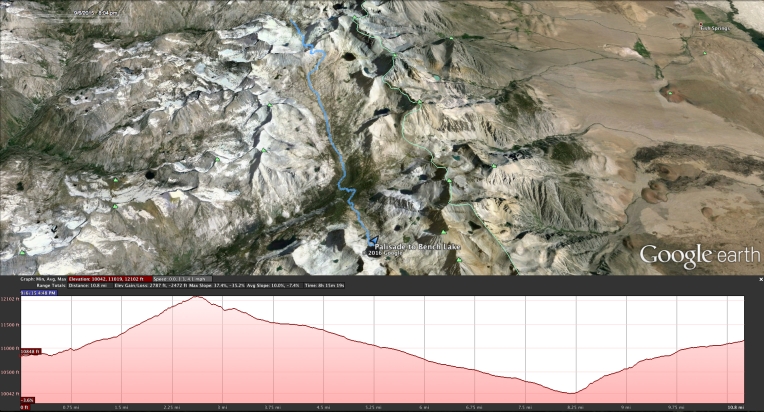 On our third day hiking half of the John Muir Trail we were traveling from Palisade Lakes to Bench Lake area.  That is the “official” permit location of our end destination, but we technically stayed at Lake Marjorie.  Lake Marjorie, which is beautiful by the way, is about a mile passed an offshoot trail that would take you to Bench Lake.  Our day would consist of an early morning 1300 foot march up to Mather Pass, a six-mile descent, and a late day 1000 foot ascent (which I don’t like at the end of a day!).  The morning, again, started off clear with stunning blue skies.  Starting the day off at 11,000 feet in early September is a gift of cool, crisp temperatures that are AMAZING for backpacking.  AMAZING.  And we were expecting some stunning views from the top of Mather Pass at 12,100 feet. 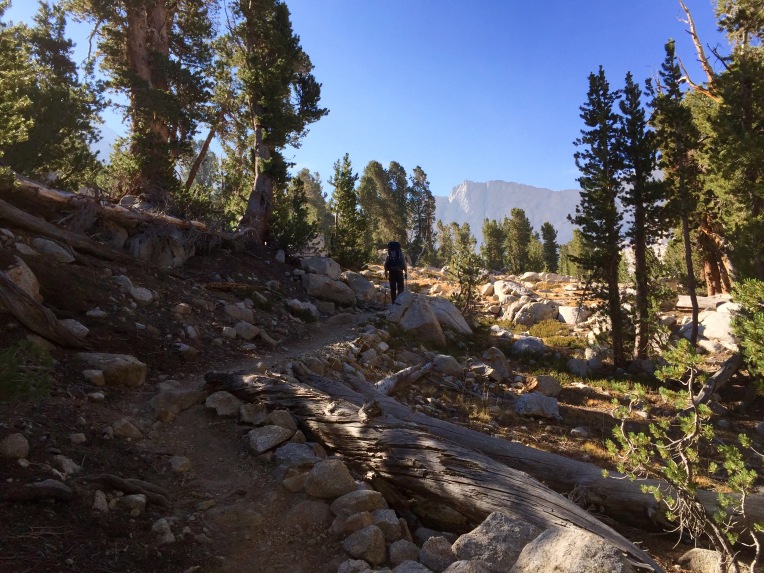 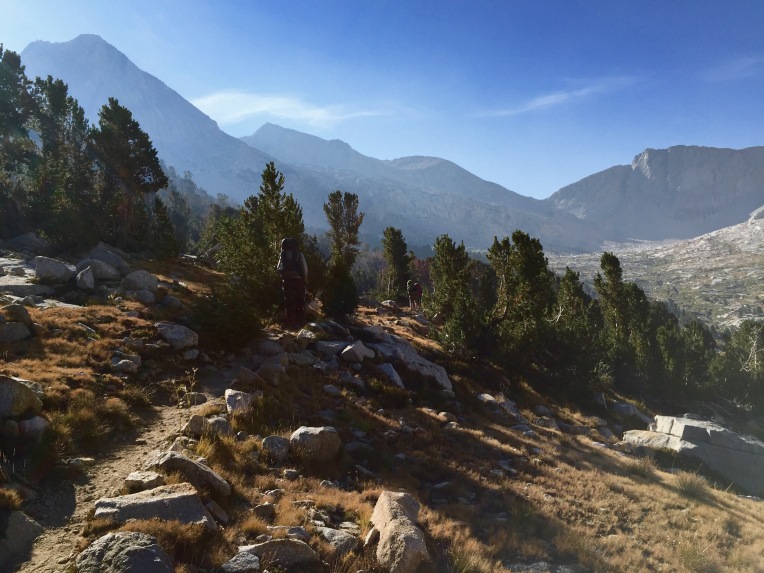 As you would expect, the trek up to Mather Pass was really pretty easy. From our campsite at the second of two Palisade Lakes it was only a 1300 foot climb.  We could see it as soon as we started hiking and were really pumped to get up there.  There was a hesitant optimism that we may have traveled south far enough to escape the eastward winds of Rough Fire.  That wouldn’t be the case on this day either.  The terrain leading southward for the first mile is sandy with old broken granite rocks amidst sequoias and pines.  The trail is easily visible and traversed.  On either side of Mather Pass you can see steep granite wall and saw tooth ridge lines, respectively.  As we gradually ascended I continued to look back.  Palisades Lake was something nice to look at up close, it’s real beauty is in how exquistively it surrounds itself with peaks and passes.  In the photo with me in it below you will see Disappointment Peak immediately behind me with Palisade Lake smiling on my side. 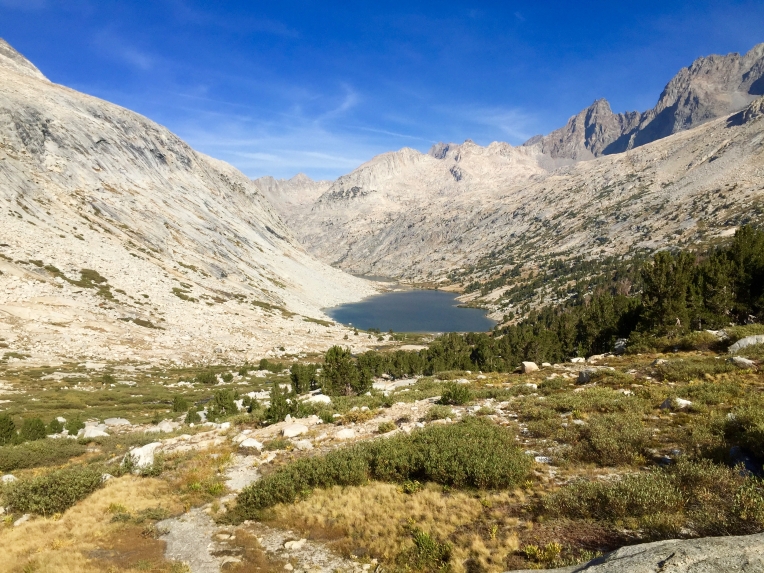 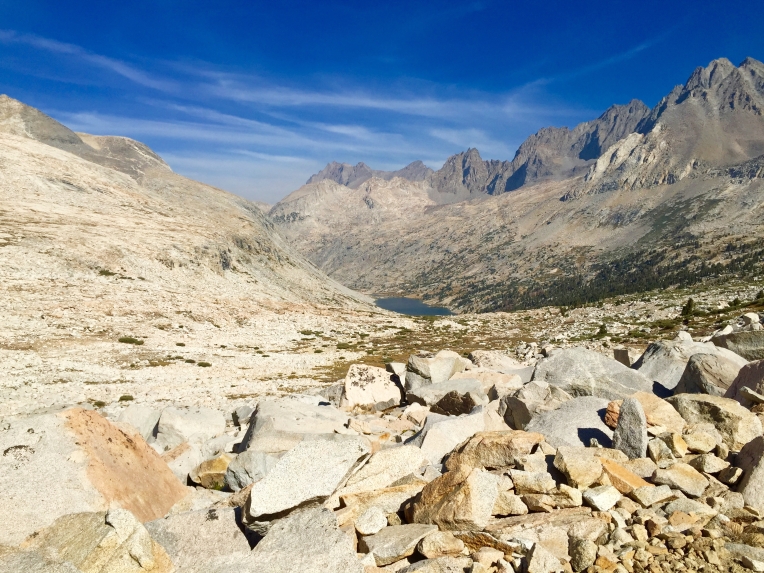 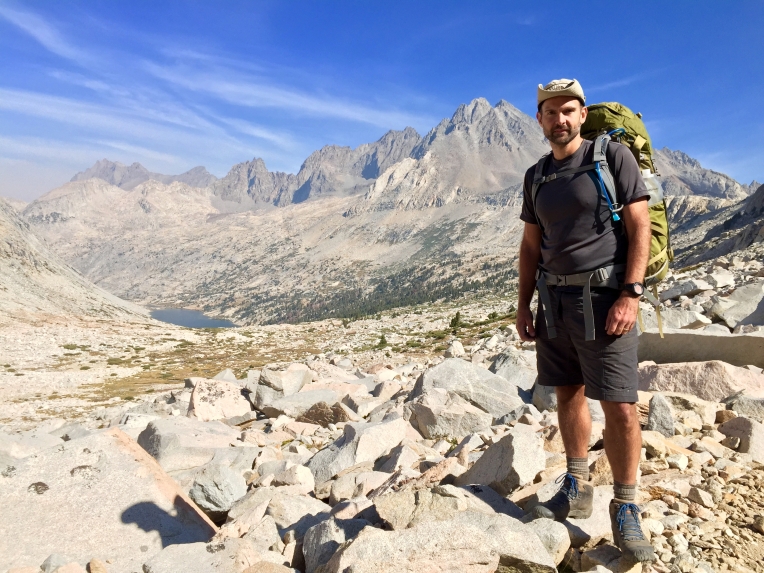 The approach to Mather Pass is wide open with busted and broken granite bits and boulders strewn about.  The series of switchbacks are easily managed and traversed.  We were feeling really strong on this day.  Between the acclimatization and adjusting to the time zone difference, we were in our element. 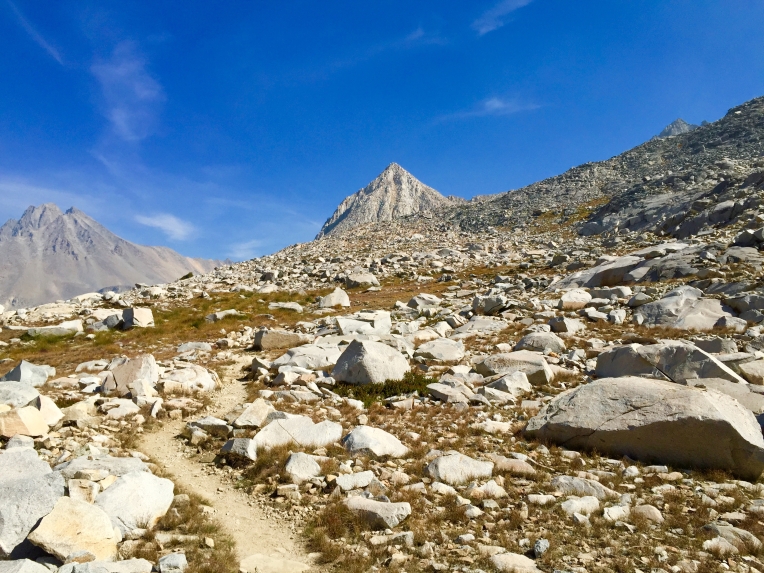 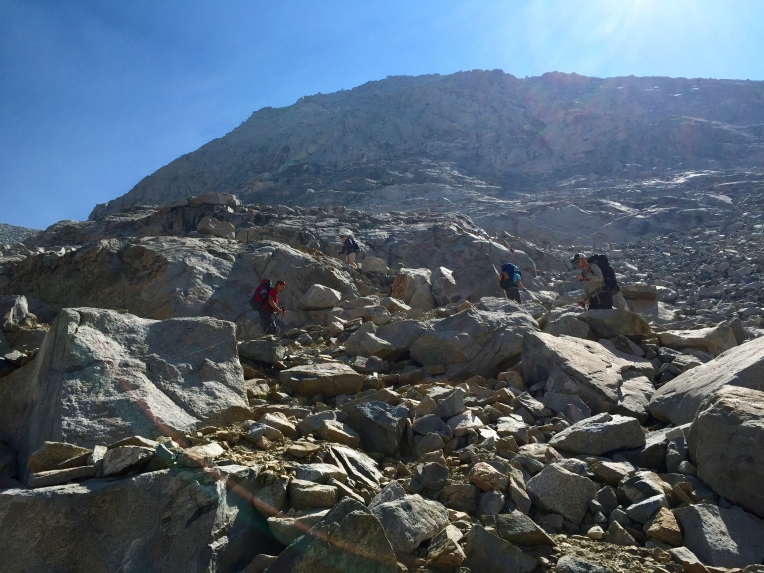 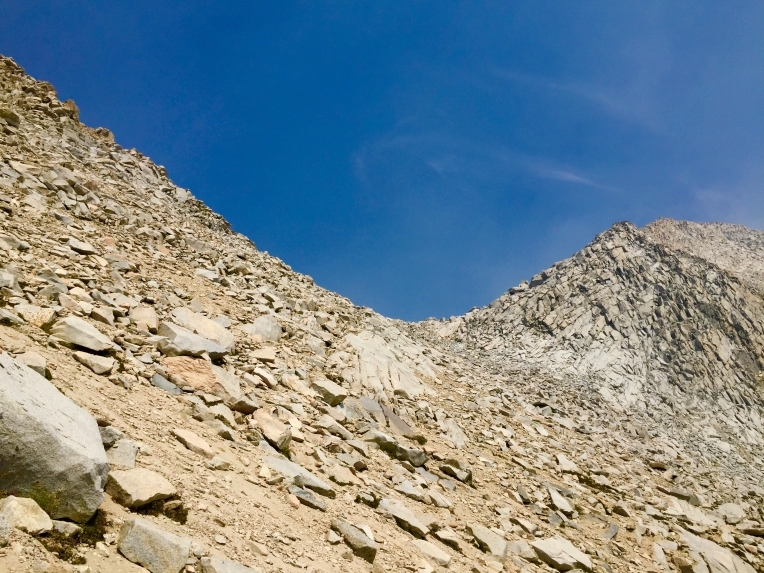 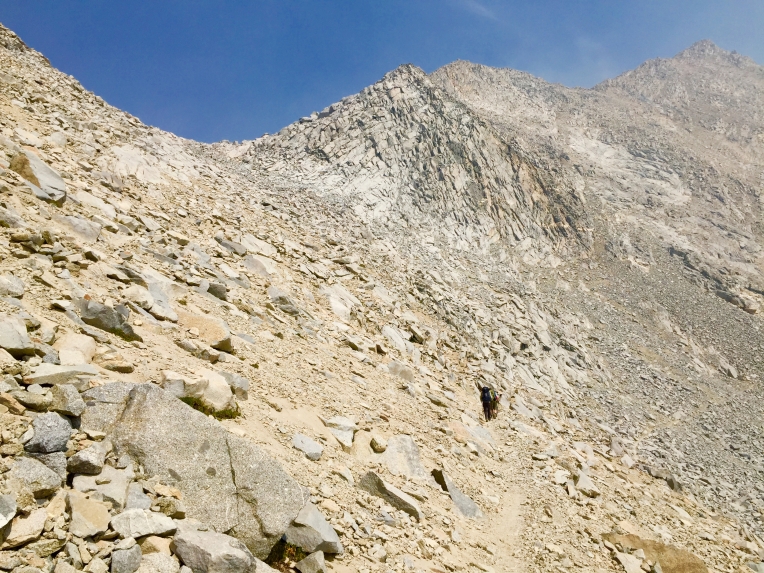 Crossing over Mather Pass was significantly disappointing.  The smoke from Rough Fire was the worst it had been up to that point.  While we enjoyed our conversation the rest of the hiking day, we were a bit deflated.  On my mind was whether or not it would get any better or if this is what we could expect all the way to Mt. Whitney.  We crossed some pretty streams but, for the most part, our visibility was limited.  It was obvious during our short breaks that morale had suffered.  Epic views were veiled by a serious irritant and my sinuses agreed.  As we approached Marjorie, she was beautiful.  It was obvious that she would really dazzle once the smoke cleared overnight. 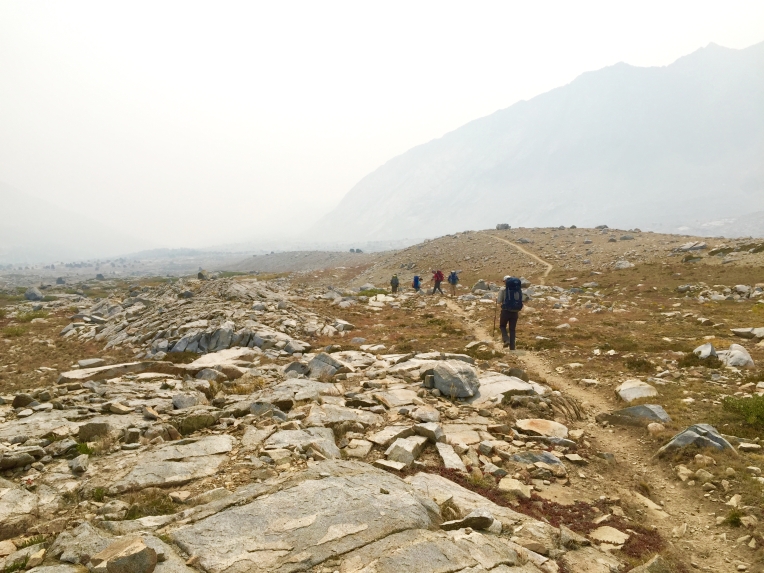 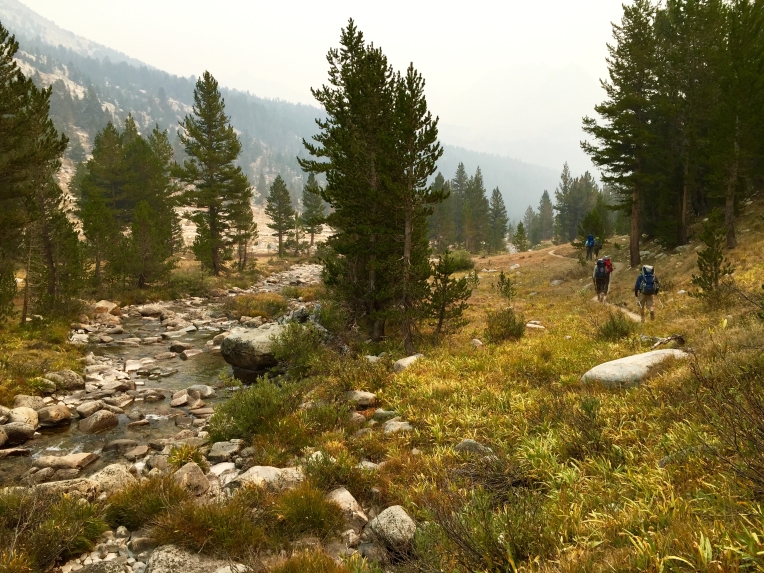 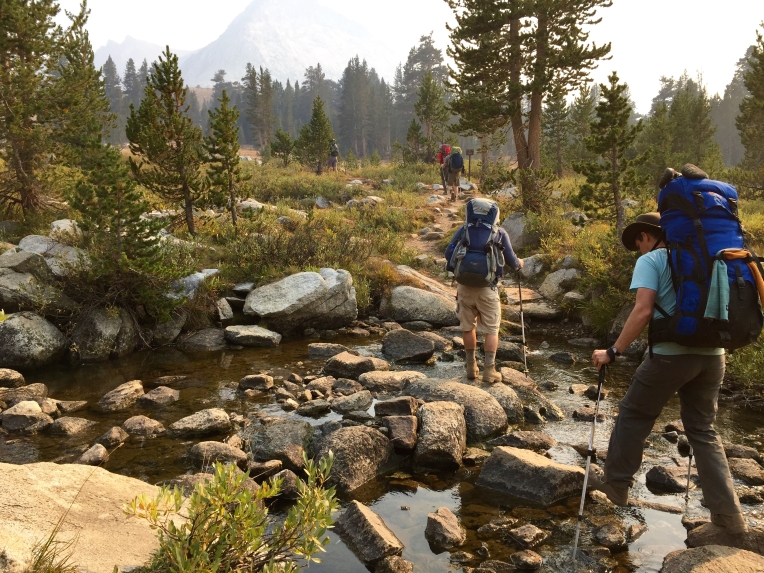 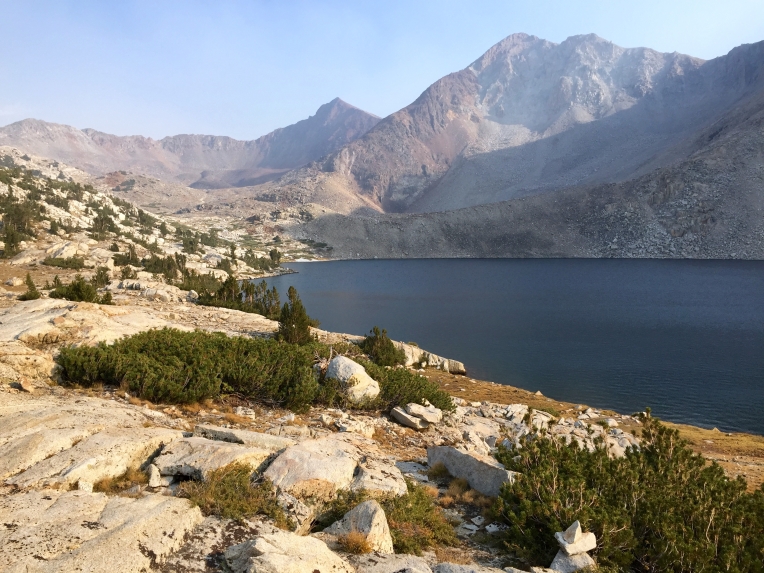 On Day 4 we would be traveling from Bench Lake area (Lake Marjorie) to Woods Creek Trail area.